In 2011, Gulshan (13 years old) and his sister Priti (seven years old) were referred to the GVC by Rajani (Supervisor) at the Directorate of Women & Child in Panjim. These children came from a troubled home of domestic violence and malnutrition and illiteracy. Their father was a labourer and an alcoholic whilst their mother held casual work cleaning homes. The children needed urgent assistance to be removed from the home environment into a boarding school where they could, at the very least have an education. 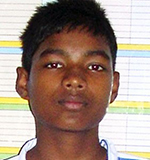 In 2013 he again failed the same year and the GVC requested coaching classes be commenced for him in the subjects he was having difficulty. In 2014, after a visit from the GVC it was established that no classes or guidance was provided to Gulshan and he had failed again (third time) in History and Science. 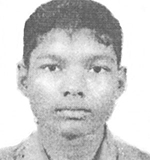 In June 2015, Gulshan took top position in his class and year. Gulshan want to continue studying into Year 11 and 12 but wants to do this on his own. The GVC have admitted him to a government recognized computer education and video editing course. On completion of his courses, we have negotiated for him to commence an internship which we will ensure leads to permanent employment. The GVC will continue to support Gulshan as he may need to ensure he completes his Year 11 and 12 which he will undertake on a party time basis.

The GVC is very proud of Gulshan’s achievements and humbled to have been part of his journey to a future of dignity and free from poverty.